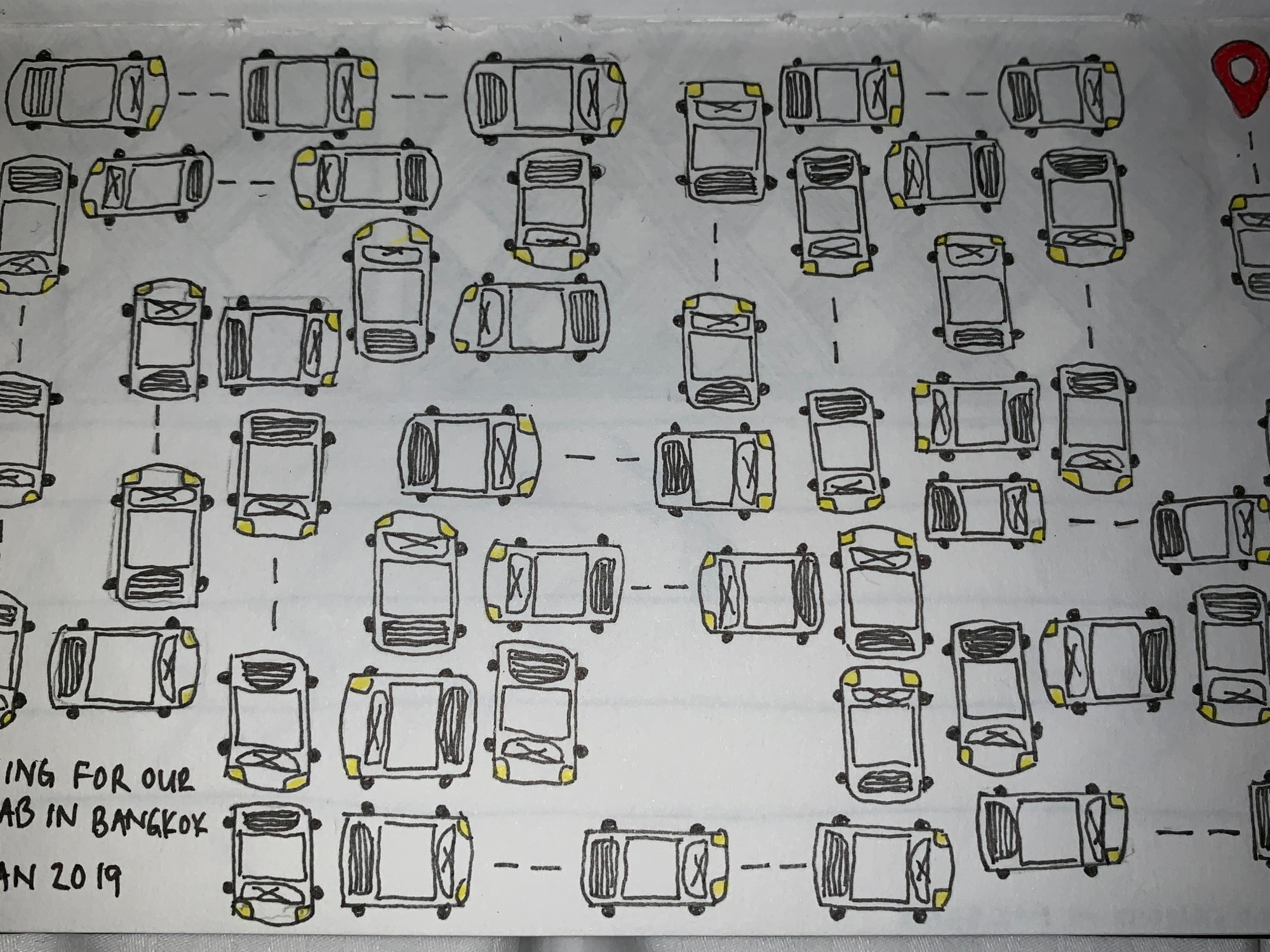 All of our posts thus far have glorified each of our stops, highlighting all that helped make our time there amazing, and sure to make you, the reader, super jelly. But just like me, traveling can’t always be perfect … just most of the time. The exception to our nearly perfect route thus far:

We stopped off in Bangkok for two days at the beginning of our trip, in between Chiang Mai and Chiang Rai. And then again for a second time, after Cambodia as a bridge on our way to the beaches of Southern Thailand. From our ample time spent, I’ve put together this comprehensive list of Pros and Cons of the capital city of Thailand:

For real. Now, I’m sure there are many people that would disagree with me. People must come here and have the most amazing time. Millions of people call this place home, and I mean no disrespect to them. But it’s nearly impossible not to allow your experience in a place to paint your impression of that place itself.

The first time through, I woke up the morning of our flight headed here with a sour stomach. That would end up lasting for over a week. So by the time we landed in Bangkok and rode the train to our hotel, I was not exactly feeling my best self. Sparing you the many details, skip to: that first night was a very early one for me spent entirely in our hotel room, thanks to sleeping pills.

We stepped out that morning, and felt a light rain. I was surprised, it was definitely not supposed to rain. Isabel told me she was reading that it was artificial rain. The air quality was so poor that government officials stepped in to either launch water cannons from high-rise buildings, or send planes aflight to inject clouds with chemicals to induce rain. Think artificial insemination for precipitation.

The absolute worst thing about Bangkok has been the traffic. I listed at the top of my Pro’s list, the BTS skytrain system. The trains come often, stations are clean, cars are new and modern, it’s great. But the system only covers so much of the city. If you’re headed to DMK Airport for instance (DMK is to BKK, as La Guardia is to JFK Airport), there is no public transportation that connects.

The morning we were leaving, we had a Noon flight out of DMK. Google Maps showed a 25-minute drive, so we [and the front desk receptionist] figured being down at the lobby by 9am would be sufficient. We could not flag down a taxi, because no one would take us there. To the airport. Hotel bellboys would hail down cabs, only to get laughed at as driver after driver sped off. Distance-wise, it’s only a 25 km trip (~15 miles). It took some time finally connecting with a Grab (Uber for Asia) driver, who was 15 minutes away. When finally the little car icon on our phone app was three blocks away, he totally stopped moving. For ten whole minutes. The traffic was at an absolute standstill. We eventually got to the airport, but what should have been a 30-40 minute endeavor took over two full hours, and we ended up running to our gate with just 10 minutes left for boarding. That didn’t make for happy travelers.

This time around didn’t get off to the greatest start, either:

12:43pm – Our plane from Siem Reap touches down in Bangkok DMK Airport.

12:58pm – We get on line for Passport and Immigration.

1:09pm – The line has moved up exactly twice; other lines for other regions are flowing.

1:12pm – I start to watch an episode of Netflix’s Russian Doll that I’ve downloaded on my iPhone in order to pass the time.

1:39pm – The episode finishes, I put my headphones in my pocket, and look up to realize that we are only halfway towards the front of the line.

1:44pm – People are leaving our line to try their luck elsewhere. We follow suit.

2:16pm – We both finally make it through Passport check. Though our flight is no longer on the board at baggage claim (because it landed so long ago), our two bags are sitting on the floor next to each other in front of one of the belts, awkwardly waiting for us.

2:22pm – We have new Thai SIM cards in our phones, and pulled cash from the ATM. I order us a Grab.

2:58pm – We’ve been sitting in standstill traffic for some time. Google Maps now says 37 minutes. I figure I have enough time to watch another episode of Russian Doll.

3:26pm – The episode ends. I really enjoyed it. I am not enjoying being in the car anymore. Google Maps = 25 minutes remaining.

3:54pm – Isabel looks over at me, exasperated. She pulls out her headphones, and excitedly fills me in on the murder mystery podcast she’s been listening to, to pass the time.

Now, I know you didn’t ask for that play-by-play. And maybe it wasn’t really necessary. But 3 1/2 hours from touchdown to hotel room? It was infuriating and exhausting. That night, we went out to a sports bar nearby to catch the Arsenal match (they blew a lead against their rivals – may or may not be your fault, Bangkok). Getting there and back, we used the BTS – Pro #1. Back at the hotel, with the help of sleeping pills, had a wonderful night sleep in an extremely comfy bed – Pro #2. Maybe things are starting to look up.

The next morning we went out for brunch to Broccoli Revolution, a healthy eatery just a 10 minute walk away. Making good decisions, what could possibly go wrong! I ordered an açaí smoothie bowl and though it detailed its toppings, it refrained from mentioning what was in the smoothie mix. I asked the cashier if there was avocado, as I’m allergic. She seemed confused, so I repeated a couple of times “No avocado? No avocado, yes?” She smiled at me. The plan for after brunch had been to enjoy a pool day once we got back to the hotel.

Except by the time we got back to the room, my stomach was killing me. So much for eating healthy – I was down for the count, and feeling miserable. Overcome with that familiar painful nausea, I realized there must have been avocado in my meal.

Hours later, I finally felt better. We never did make it to the pool as the day was wasted, but we did go out for dinner in the area, and finished off our last night in Bangkok watching a movie from the comfort of our bed.

Not every single thing during our travels is perfect. And if you read other travel blogs or follow professional travel couples on social media, it ain’t always glamourous. Don’t for a second think that it is. Those are just the highlights. But if I must say something nice about Bangkok, it did make me realize how easy everywhere else has been. Knock on wood, we’ve had no issues with flights or hotels, no major roadblocks in getting around or seeing what we’ve sought out to see.

So Bangkok, thanks for making everywhere else shine that much brighter.